If This Gets Out by Sophie Gonzales & Cale Dietrich 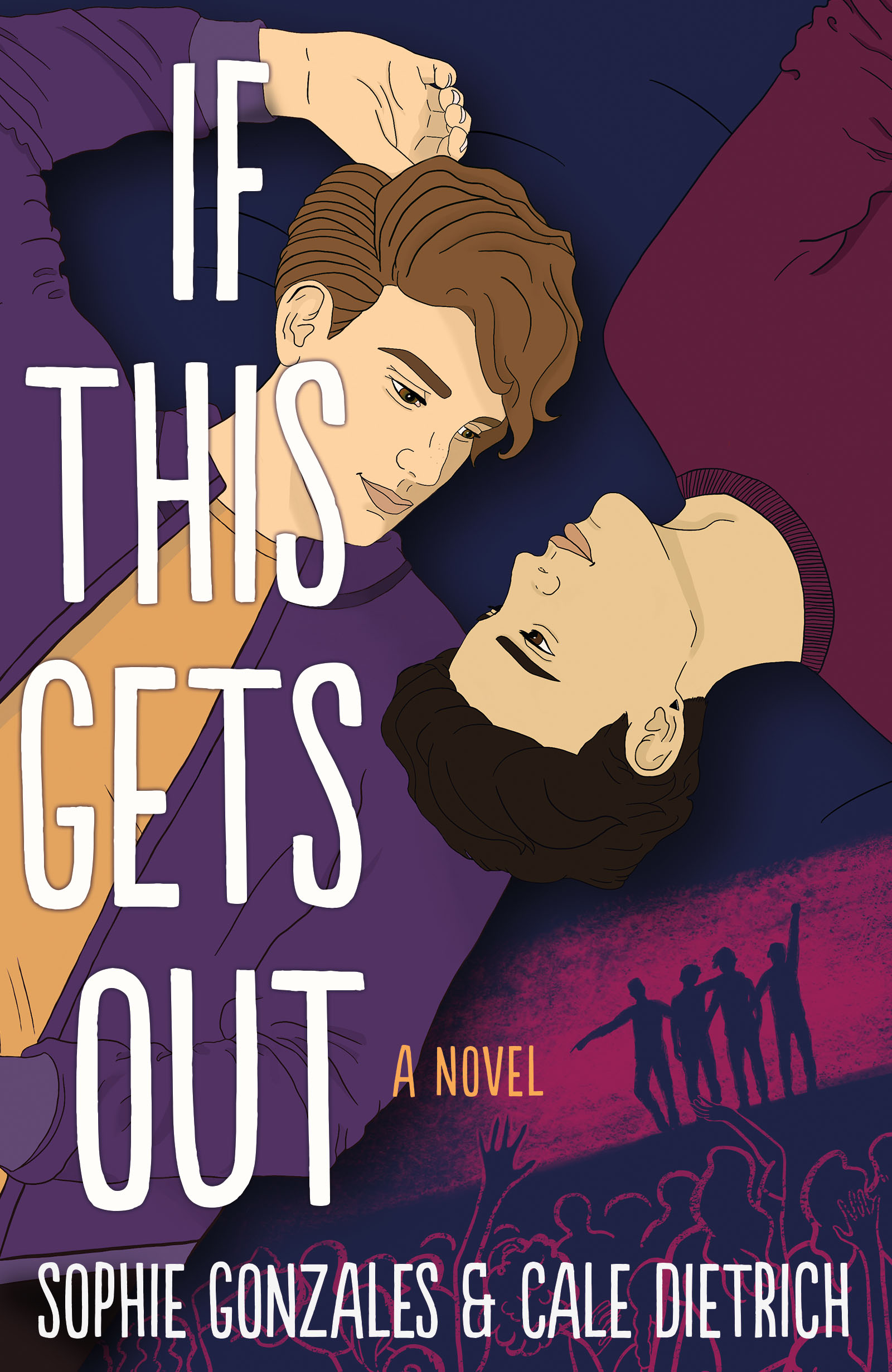 Synopsis: “If This Gets Out is an absolute showstopper! Equal parts edgy and adorable, this bright, joyful book has everything I look for in a queer YA romance.” —Phil Stamper, bestselling author of The Gravity of Us

Eighteen-year-olds Ruben Montez and Zach Knight are two members of the boy-band Saturday, one of the biggest acts in America. Along with their bandmates, Angel Phan and Jon Braxton, the four are teen heartbreakers in front of the cameras and best friends backstage. But privately, cracks are starting to form: their once-easy rapport is straining under the pressures of fame, and Ruben confides in Zach that he’s feeling smothered by management’s pressure to stay in the closet.

On a whirlwind tour through Europe, with both an unrelenting schedule and minimal supervision, Ruben and Zach come to rely on each other more and more, and their already close friendship evolves into a romance. But when they decide they’re ready to tell their fans and live freely, Zach and Ruben start to truly realize that they will never have the support of their management. How can they hold tight to each other when the whole world seems to want to come between them?

Disclaimer: I received an eARC via Netgalley in exchange for my honest review. This does not affect my opinion whatsoever.

Once you’ve learned shame, it settles into your skin like a tattoo. You can cover it up but you can’t scrub off the sense of inadequacy.

If This Gets Out is one of my most anticipated releases this year and in December. Sophie Gonzales has been on my ‘I must read’ author ever since Only Mostly Devastated and Perfect on Paper that talked about a lot of personal issues I don’t see a lot in books. This time, If This Gets Out by one of my favorite authors and an author I have never heard of, but I’ll certainly be checking out his work when I get the chance.

This book came into my life when I needed it the most. I’m so glad that it is coming out later this year, because this book is so meaningful for me. There are a lot of topics that are talked about, and there is even a questioning character in this book and I’m still getting soft over this book.

If This Gets Out follows a boy band, Saturday, that consists of Ruben, Zach, Angel, and Jon. They are wildly popular and Ruben grows tired of the constant pressure from their management and keeping in the closet for reasons such as Russia, and parents. During Saturday’s Europe tour, Ruben and Zach grow close together until they want to come out to their fans. The only problem is, their management will never let them.

This book is probably one of the cutest things I have read. Trust me, when I say you’ll be smiling for the entire book because this book is that cute and adorable. I had a grin on my face the whole way through because there are just certain scenes especially the ending that made me feel warm and bubby from reading it. It’s also a great book for just wanting to read something quick, because I FLEW through this.

This book is a great quick read especially since it talks heavily about questioning oneself, toxic parenting and how a management team can be toxic and be controlling.

There’s a discussion about toxic parenting and how hard it is in cutting them out. I’m a victim of the abuse, and toxic parenting and the damage that does to you, is therapy’s worth. Seeing, Ruben deal with his mom’s parenting had mirror my own in a similar manner. They could always say I love you, but toxic parenting will always criticize you on your work and you will never feel like you could live up to their expectations.

I think the main difference between mine and Ruben’s is the fact that mine is nice to everyone when around people, but behind doors, it’s a different story. Ruben’s mom is just plain terrible all around and really reminds me of my grandpa’s wife who’s a downright bitch to everyone.

It also talks about the boundaries and how hard it is in setting your boundaries up when it comes to toxic parenting. It’s such a hard feeling because you feel like you have to drop everything and listen to everything the parent says because they will kill if you dare to do anything about. Boundaries are so hard, but seeing Ruben try and make in difference and try and cut his mom out is so meaningful. While I’m certainly not in a position where I can’t do so, I’m trying to set my boundaries on not letting people walk all over me until I’m in a position where I could cut off my family.

The questioning rep was so meaningful and really touched my heart that there was actually a main character who was questioning his sexuality. I don’t see those type of things in Fiction often, and many times books its always a ‘one size fit all’ situation. The main characters especially in YA, always have them to where they know their romantic and sexuality and frankly, as someone who has questioned everything about theirself-there’s simply not enough books.

It’s incredibly isolating as a reader because it makes it seem like we have to figure it out. We have to know who we are because there’s not enough books that feature questioning. Anyways, I feel like I’m getting ahead of myself about my feelings on that-but there are certain books where the emotions and living as a queer person is super positive. It’s not something that I don’t think a cishet writer can write about especially the issues about questioning. In Zach’s case of questioning whether he was queer or he was straight.

Gonzales and Dietrich captured those feelings perfectly and it was actually a super important thing in If This Gets Out. It’s also probably one of my favorite things in this book because the questioning rep was just perfection and captured my feelings when I questioned everything.

As everyone knows, artists are not treated well in the industry and it shown how it could make someone lose it and spiral into suicide. The deceptions of mental health was also important and the way that was explored through Angel. It was so interesting to see how fame can mess someone up really quickly.

If This Gets Out is a YA RomCom that features an M/M relationship. Romance in books are always a fifty fifty for me. I usually hate them, but this book made me fall in love with it. There are healthy deceptions of relationships in this book and shockingly both Ruben and Zach have chemistry together.

If This Gets Out is one of the cutest stories I have ever read. I loved the romance between Ruben and Zach and the way it was developed. Also, the fact that it is a boy band is just something else entirely. There were tons of discussions surrounding this book like toxic parenting, boundaries, mental health, and trying to come out when everyone doesn’t want you too.

Bio: Sophie Gonzales was born and raised in Whyalla, South Australia, where the Outback Meets the Sea. She now lives in Melbourne, where there’s no outback in sight, but slightly better shopping opportunities. Sophie loves punk music, frilly pink skirts, and juxtapositions.

​Sophie has been writing since the age of five, when her mother decided to help her type out one of the stories she had come up with in the bathtub. They ran into artistic differences when five-year-old Sophie insisted that everybody die in the end, while her mother wanted the characters to simply go out for a milkshake.

Since then, Sophie has been completing her novels without a transcriptionist. 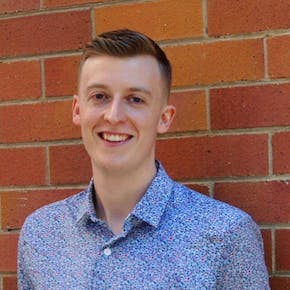 Bio: Cale Dietrich is a YA devotee, lifelong gamer, and tragic pop punk enthusiast. He was born in Perth, grew up on the Gold Coast, and now lives in Brisbane, Australia. His debut novel, The Love Interest, was named a 2018 Rainbow List Selection. He can be found on Twitter.