Fun fact, I wasn’t planning on doing this-but unfortunately I saw a couple of things that pissed me off. It lost my respect for them and I refused to read anything to do them. This list includes Mackenzi Lee, Rainbow Rowell and Emily A. Duncan, so I decided to do a post about it in case anyone is curious. Please note, this is not a hate list, but merely authors I don’t feel like supporting because of their problematic actions+books. It’s just my opinion.

Lee had 3 incidents. I’m still bitter over the 2nd incident, and even though I have emailed her my thoughts about it. It hurts though. I’m demisexual bisexual (I get the whole changing labels part, because I’ve done it but still fall under the bisexual and asexual spectrum). Or maybe it’s the fans that are doing it-but she never said anything about it, and is fine with it.

Her first incident was back in April by attacking a fan. Both Daniel and Sara both wrote posts about this incident. I saw the aftermath (Unfortunately I was in biology when this stuff went down), but damn that was harsh.

Daniel had voiced his opinion about the book. It was a simple harmless tweet, but what happened afterwards just left a bad taste in my mouth. It was just a fan who was concerned, but damn.

Someone replied, and he replied back:

Unfortunately, the author replied to it rather negatively. (How on earth would the fan know?)

This was her first incident, and I was just upset especially since bad things could have happened (Also, note that she never apologized to the fan).

Her 2nd incident made me upset. This happened back in June during pride month especially. And while she did said she was sorry during the email, but the damage was already done long before that. 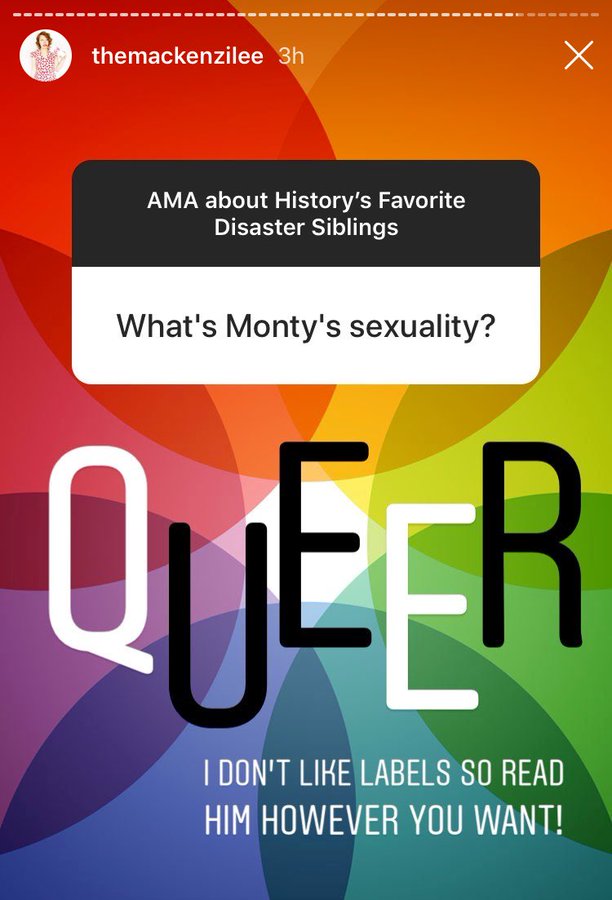 Again this is the incident which involves fans and the author herself. The reason for that is from what she wrote in the email I sent her. I wrote Monty as a bisexual character because that’s also how I identify and I wanted to see bi people in Historical fiction. However after two years of talking to readers who have told me they read him as pan or queer etc. and that makes *them* feel seen in literature for the first time, I didn’t want to take that away from so many with such rigid labeling. For me, the experience a reader has seeing them self in a book trumps a label, and I didn’t want to exclude readers. I’ve also always been generally anti label and pro changing your labels as needed. Monty lives in a time before labels and since it’s never explicit in the book, I have no problem with people reading him however they need to read him to feel seen. That’s what matters most to me in the end. I do not see it as erasure, rather increased inclusion. I’m sorry if you don’t feel the same.

Fun fact, everyone who reviewed this book told me there was a bi protagonist, and I distinctly remembered the first book saying he liked both girls and guys (or am I just losing it?). Wait no I’m not but it says so in the synopsis of Monty being bisexual “Henry “Monty” Montague was born and bred to be a gentleman, but he was never one to be tamed. The finest boarding schools in England and the constant disapproval of his father haven’t been able to curb any of his roguish passions—not for gambling halls, late nights spent with a bottle of spirits, or waking up in the arms of women or men.”

I don’t care about the inclusion at all. I may be selfish, but I’m tired of fans erasing people’s sexuality if they’re bisexual. It happens to Magnus Bane, and it makes me upset.  Like come on, there are a lot gay books out their and little to none with being pansexual, but leave bisexual people alone. We barely have a handful of books with accurate good rep of being bisexual.

I know Lee meant well, but the fact that she put queer made me a little upset. She always said he was bisexual. I get the changing labels too though, but the read him however you want hurts a lot more-because that’s bi-erasing to those who are like I am despite being demi also. Whether you think of it or not, that part is harmful.

And her third incident is this. She has a book coming out I guess in 2021 now called “The Madness Blooms”. This has been on my radar thinking it would be a w/w book. This book was known for years as being a Lesbian historical romance, and the fact that she now said something about it being trans now, is even more harmful. She let this go on for years and never said a word about it.

And now, she just casually mentions this book is trans. I’m all for people writing rep. as long as it’s not harmful, forced or making the characters seem not human. That would probably be an unpopular opinion, but it’s my opinion. Take it or Leave it.

The old blurb purposely misgenders the protagonist, making it seem to be a token character. And even the new blurb, feels harmful, or maybe it’s just me.

I also saw things that the trans rep in this book is not so good from those ARC’s people got, despite fixing the blurb. But the point is, 3 tries and she had 3 major mistakes, and continuously makes harmful mistakes.

Why would I want to support this author, because of this behavior? I was upset the first time and literally said to myself “Never again” with her books, but then this stuff popped up in my radar, and was more problematic than anything, it made it clear. I don’t care if she does proper rep. or makes entertaining books, her behavior on social media is terrible.

Wicked Saints was book I was looking forward to and was about to read it, before this happened. Unfortunately, I have little to no proof because apparently the author deleted her tweet. I make it known that I’m a teen, and it is so very difficult for us blogging and all that.

But literally, from what I remember from that tweet was “There are no teens on Goodreads or Twitter. All those reviews comes from 30-year-old white men.”  Basically, she invalidaed teens not on Social Media, and as a Teen, I apparently do not exist too her.

I also saw that she had harmful material in her books especially Muslim wise, so yeah, that is an automatically a no for me.

This isn’t harmful actions-merely harmful stuff in her books that I have noticed. Carry On and her book Eleanor and Park. Both novels are good, but it’s problematic behavior is not exceptional.

“Eleanor and Park” had racist tendencies to Korean Americans, and it was present throughout the book. Unfortunately, the author refuses to acknowledge it, and apologize of what happened in the book.

I did notice it, and I did felt uncomfortable with that fact-which is the main reason I refuse to post a review up on my blog for it, because I really don’t want to support that kind of behavior. Probably, it’s a good thing I got the book super cheap because of it.

And in Carry On, I didn’t even know it had harmful stuff in it until I saw something on Twitter about it, so I looked it up. Probably makes sense, I did notice it, but did not bother me? It should though especially since I am still part bisexual even if I added demisexual to my sexuality.

There was a part in the book where Simon was questioning his sexuality. He was in a relationship with Agatha, but broke up with her and likes Baz. He was questioning his behavior whether he was gay or he was straight. But how come there was no option that he was bisexual? She bi-erased bisexuals in fiction and that’s something I will no longer be apart of.

Once Wayward Son is released and I review it, I will no longer support her work.

Honestly these are my thoughts of these authors toxic actions and why I basically can’t get behind them. Do you agree with what I said in this kinda pretty lengthy discussion post? Tell me in the comments!

How was your October?
What is your favorite read in September?
What are you currently reading?
What are some of your favorite books you read in August?
Despite me having work constantly and me going on a week long vacation, I have read quite a bit of books! 9 in total!
What did you read in June?